10 events - circus performances, fire show on stilts, light show, performance with carnival costumes and masks, live statues, circus and carnival workshops. 3 days of festival happiness - 19, 20 and 21 May 2017. The most wonderful time of the year in Gabrovo, when the city becomes Carnival. This is the first edition of the 6Fest Gabrovo International Festival of Urban Art and Happiness.

In the afternoon of May 20, 2017 Circus de la Lyulin turned the Park with the Bear into a circus arena with their performance "Poco Loco", which won the special prize for the most extreme street attraction at a festival in Rousse in 2015. The culmination of the carnival evening in Gabrovo at 6Fest 2017 was the light show of Circus de la Lyulin and friends. Immediately after the concert at Vazrazhdane Square and before the 3D mapping show, the artists performed an unique light and and acrobatic show on the stage. 6Fest 2017 continued on May 21, Sunday. In the morning in the yard of the Interactive Museum of Industry in Gabrovo, Circus de la Lyulin organizes a circus workshop. It was a great joy for 6Fest that the young group from Kozloduy Fenix the group Fire Shadows from Gabrovo had come to the workshop. Cirque de la LyuLin has participated in the second biggest world carnival, after the one in Rio de Janeiro - Carnival of Santa Cruz de Tenerife on the Canary Islands. They were semi-finalists in the popular TV show “Bulgaria got talent”. 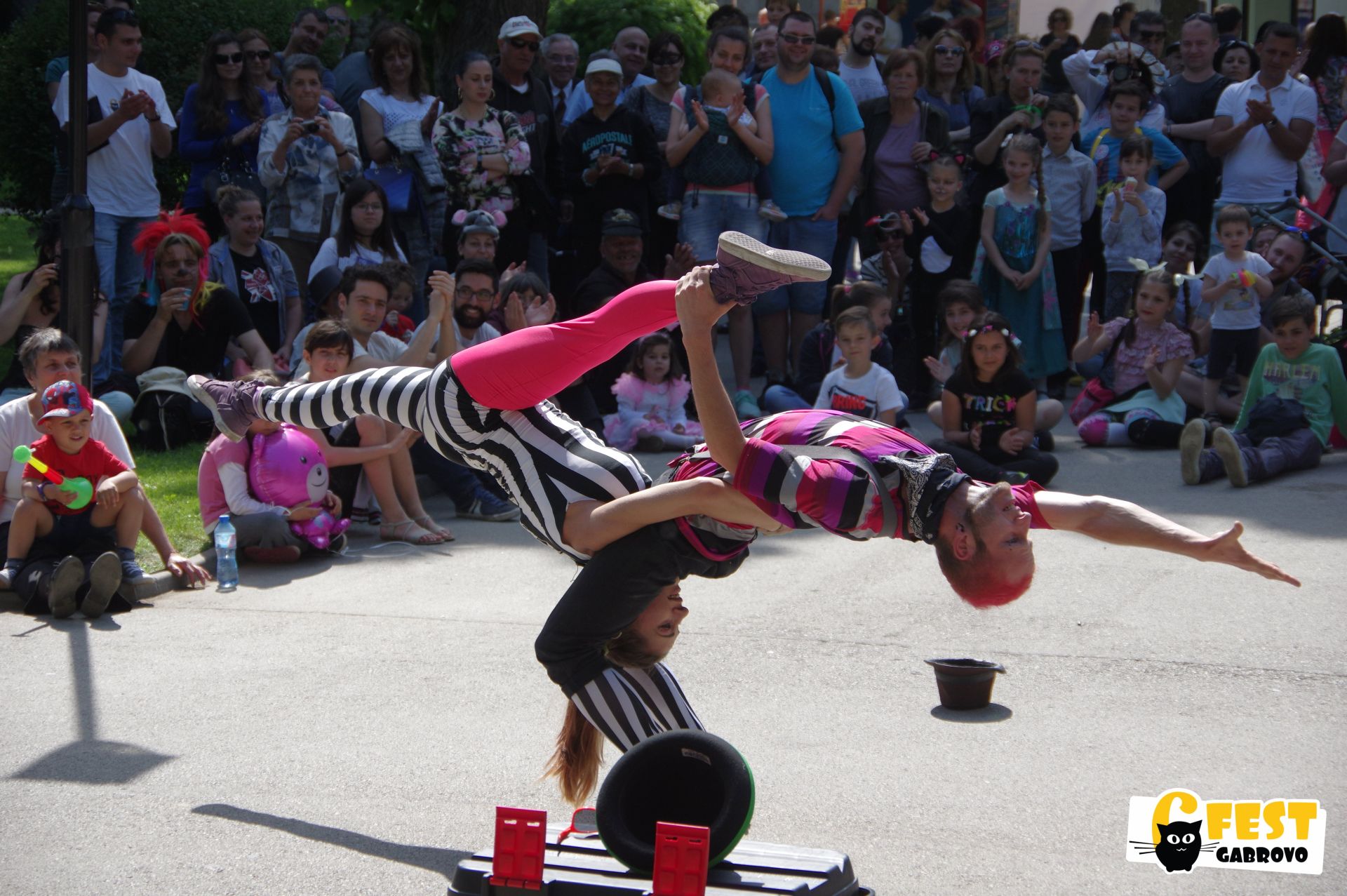 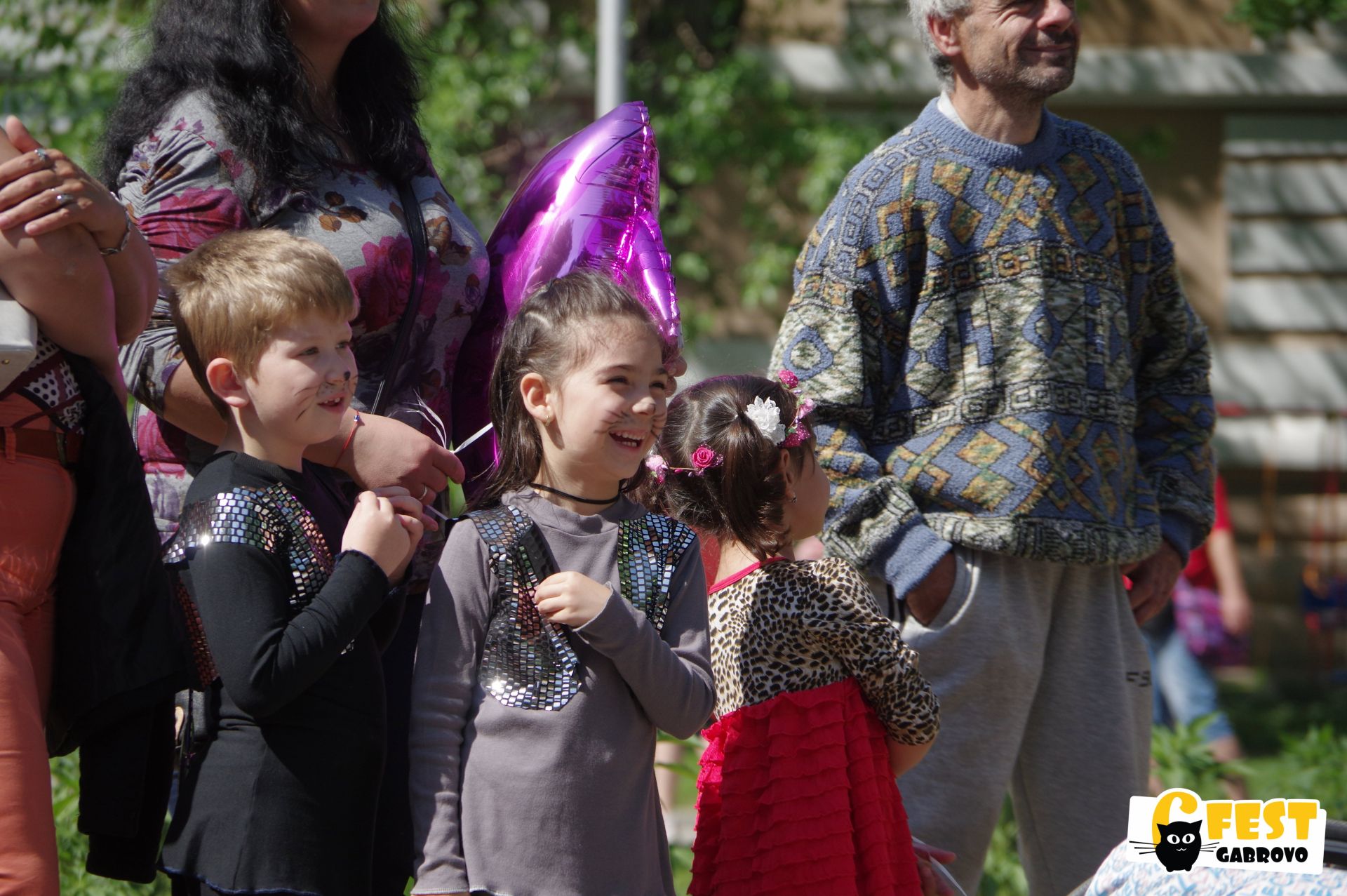 Theatre of fire and shadows Fireter

In the afternoon hours of May 21, 2017 magicians from Theatre of fire and shadows “Fireter” made a mobile show in the center of Gabrovo - in the Park with the bear, Vazrazhdane Square and Radetska Str. The closing event of the 6Fest International Art and Happiness Festival was an exciting fire performance on stilts performed by Fireter artists. Theatre of fire and shadows “Fireter” perform different kinds of fire show, stilts show, fire performance, stilts performance, jumping stilts, fire juggling, fire installations, live statues, etc. They have participated in international festivals in England, Germany, Romania, Russia, Greece, Lithuania, Turkey. 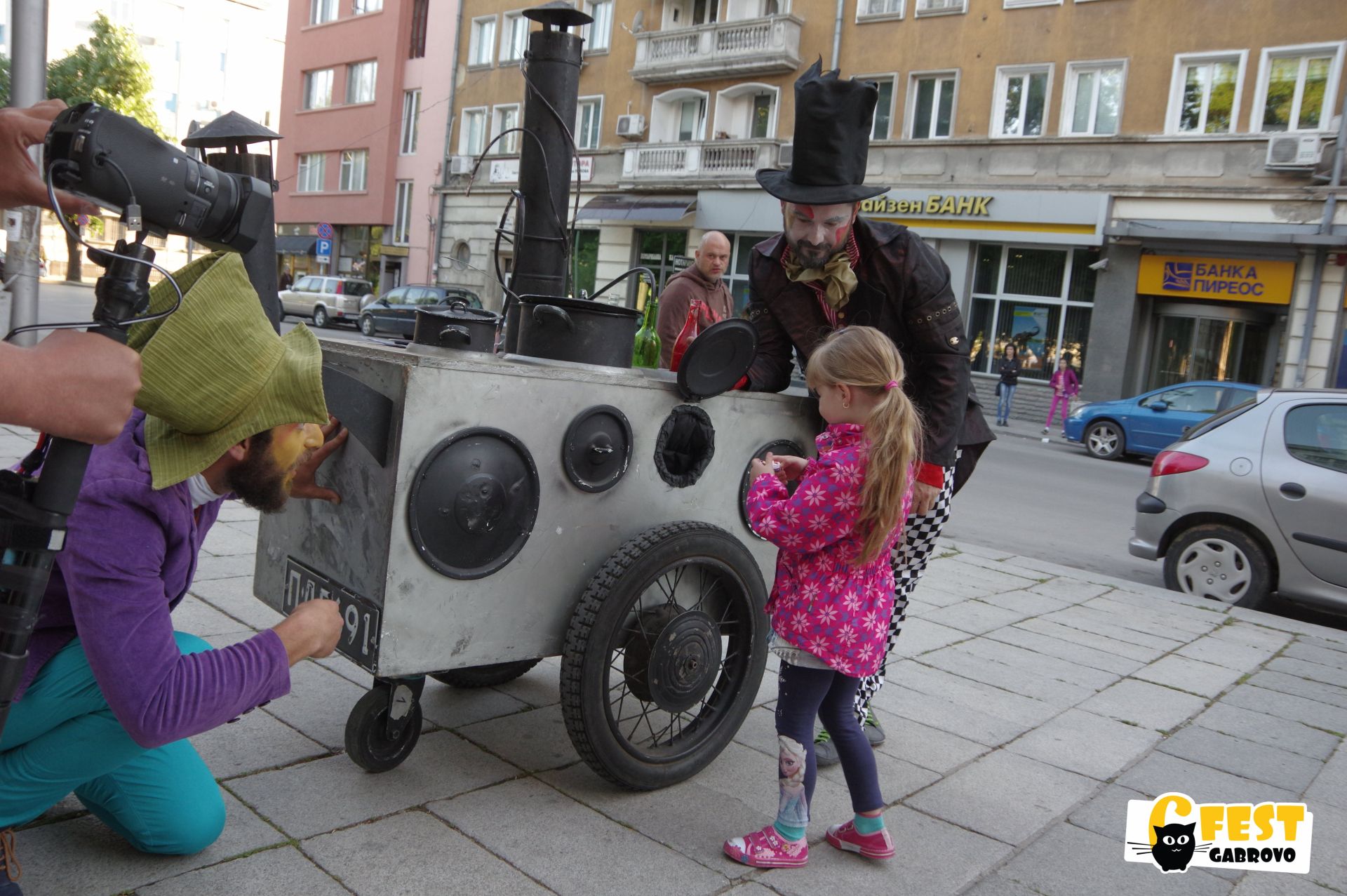 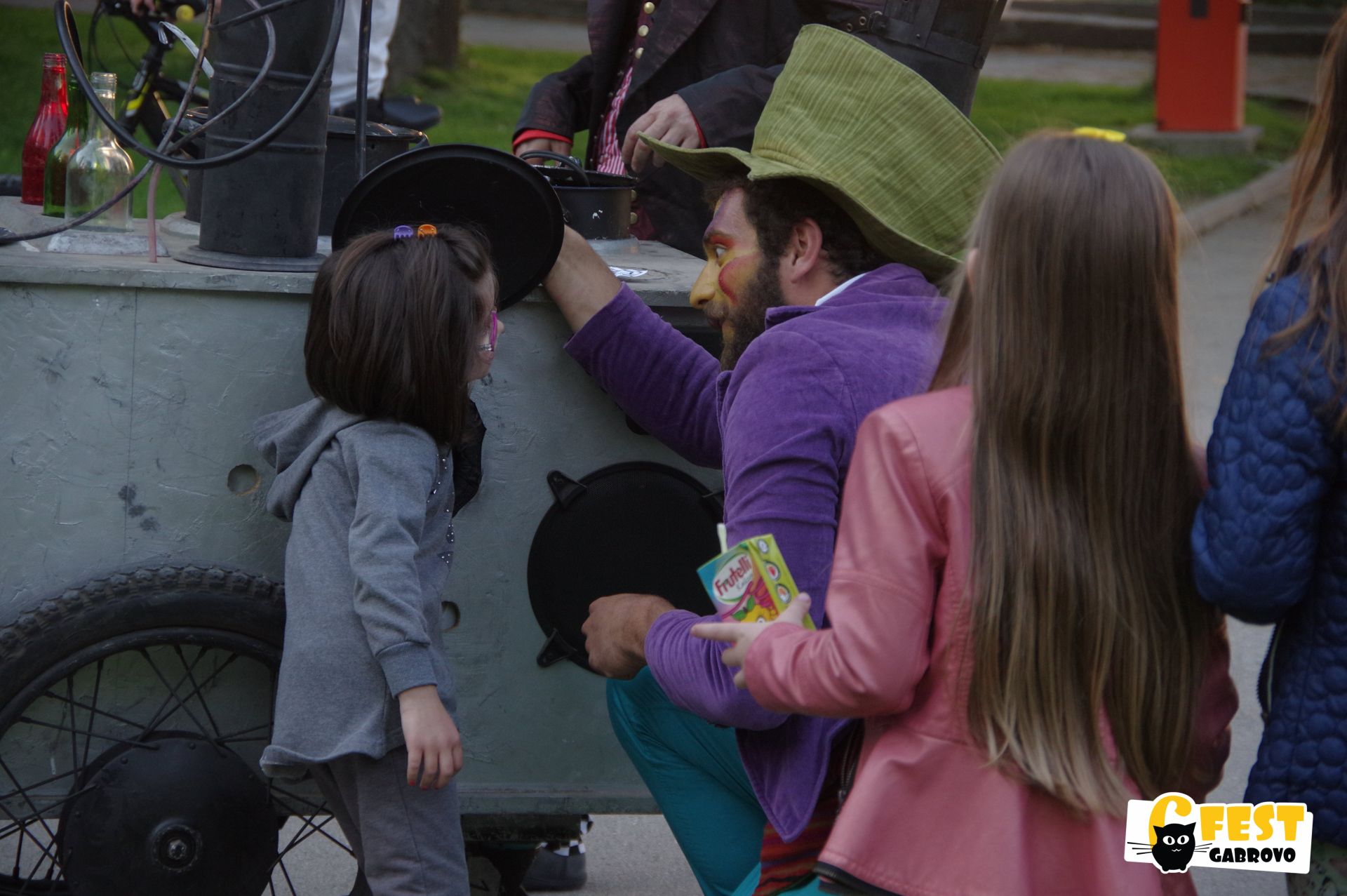 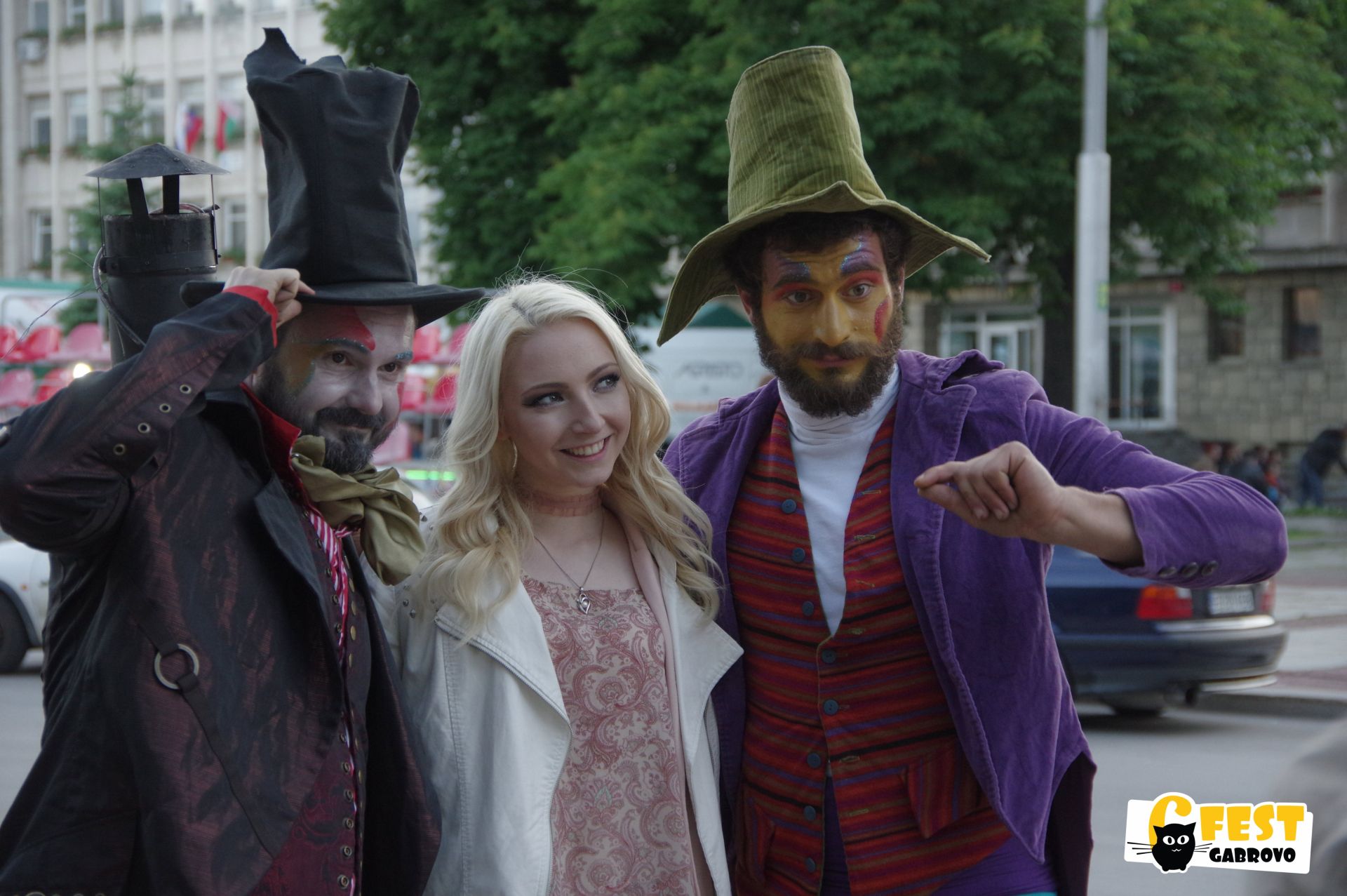 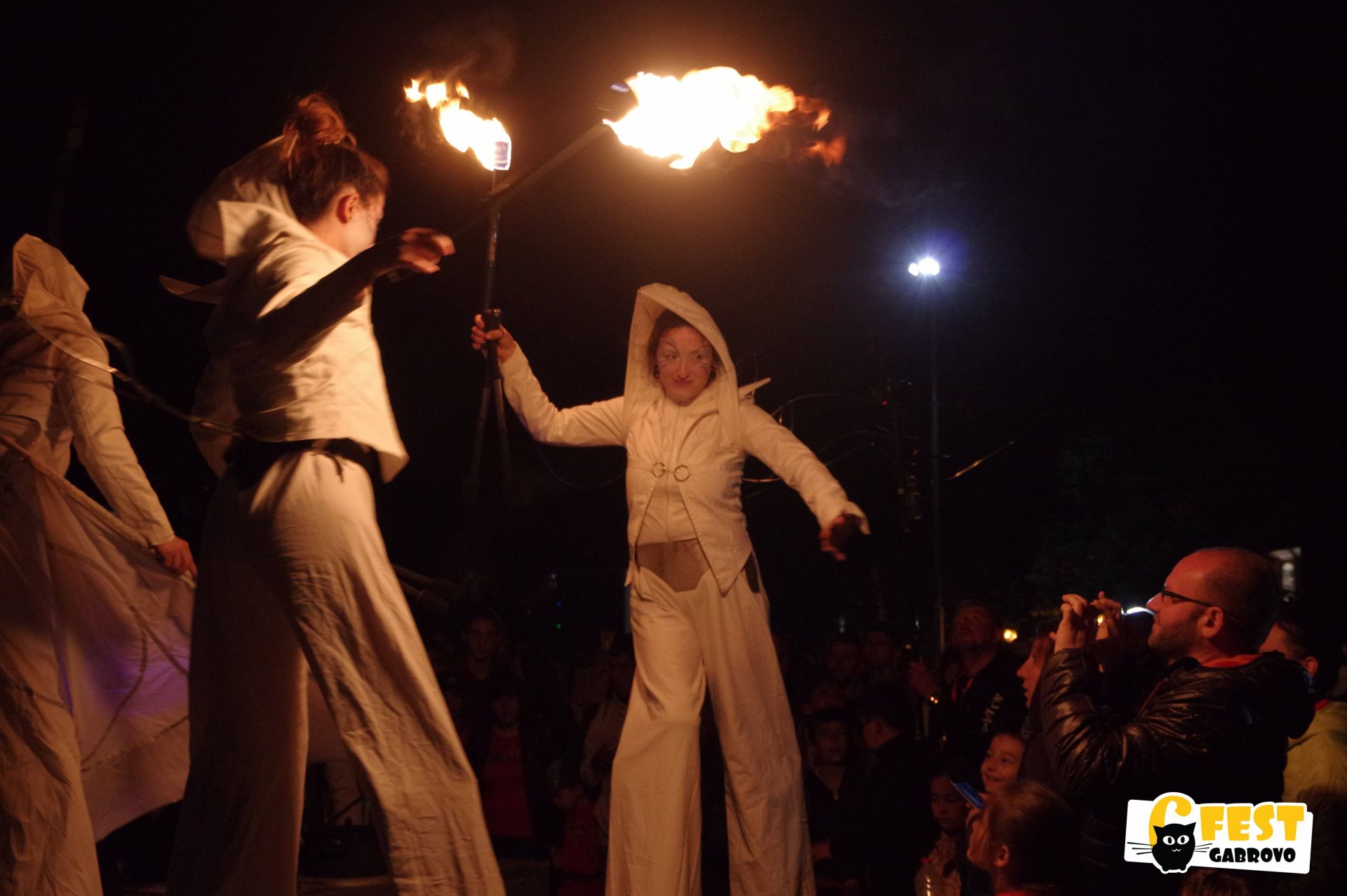 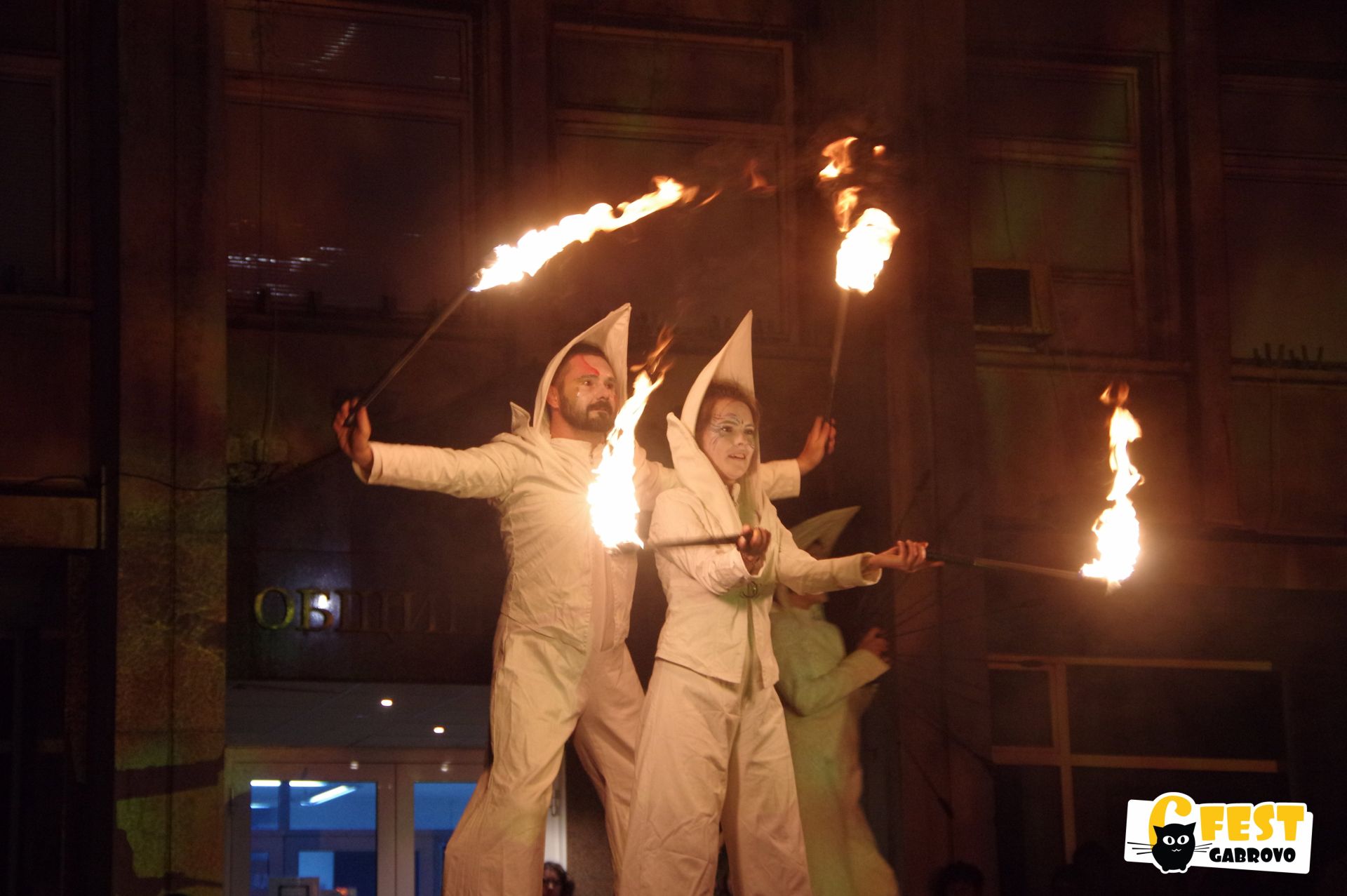 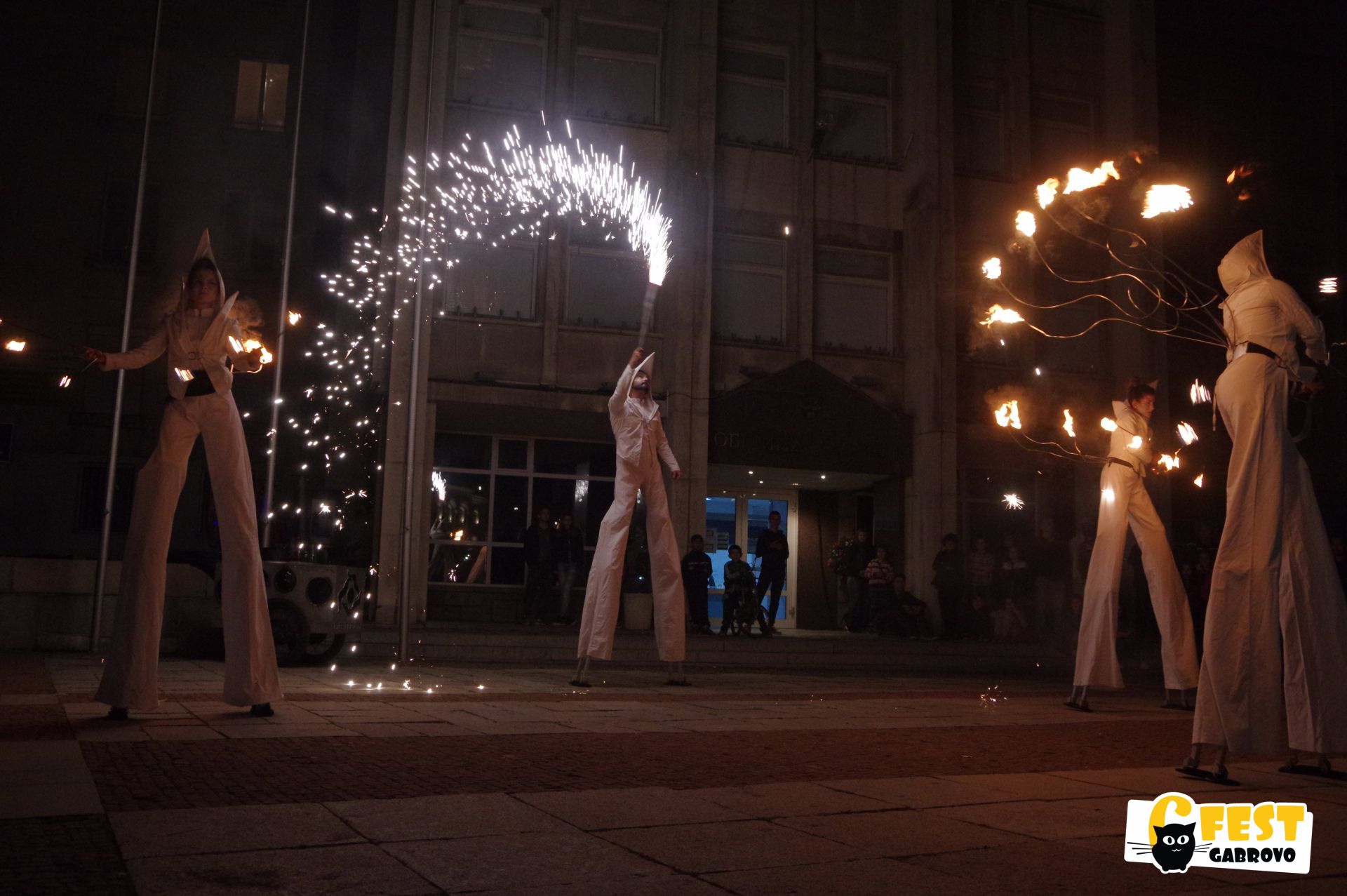 On May 19 in Gabrovo, in the spirit of the European carnivals, FIRE THEATRE Mime Company made a street carnival performance with live statues, mimes, carnival characters. The event happened in front of the House of humor and satire. On May 20th, 2017 ythe artists made a carnival workshop in front of the Orlovets Sports Hall - the participants explored some of the most popular techniques of carnival, street art and outdoor theater. FIRE THEATRE Mime Company is based in Sofia, Bulgaria independent theatre formation, established in 1993. They perform pantomime, non-verbal, outdoor, site-specific and fire theatre. They have participated in international festivals in USA, Austria, Germany, France, Turkey, Greece, Romania, India, South Korea, Tunis, Jordan. 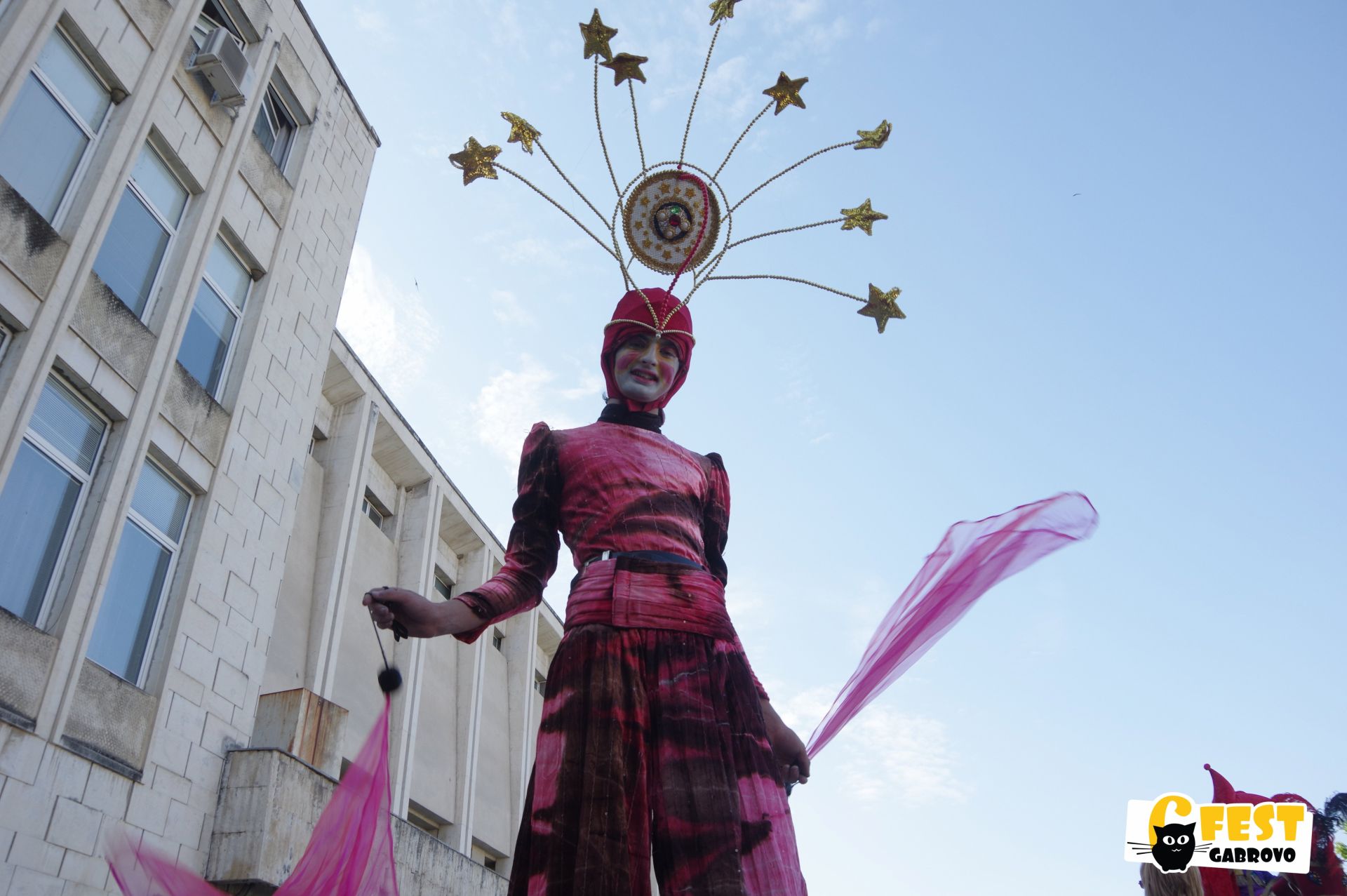 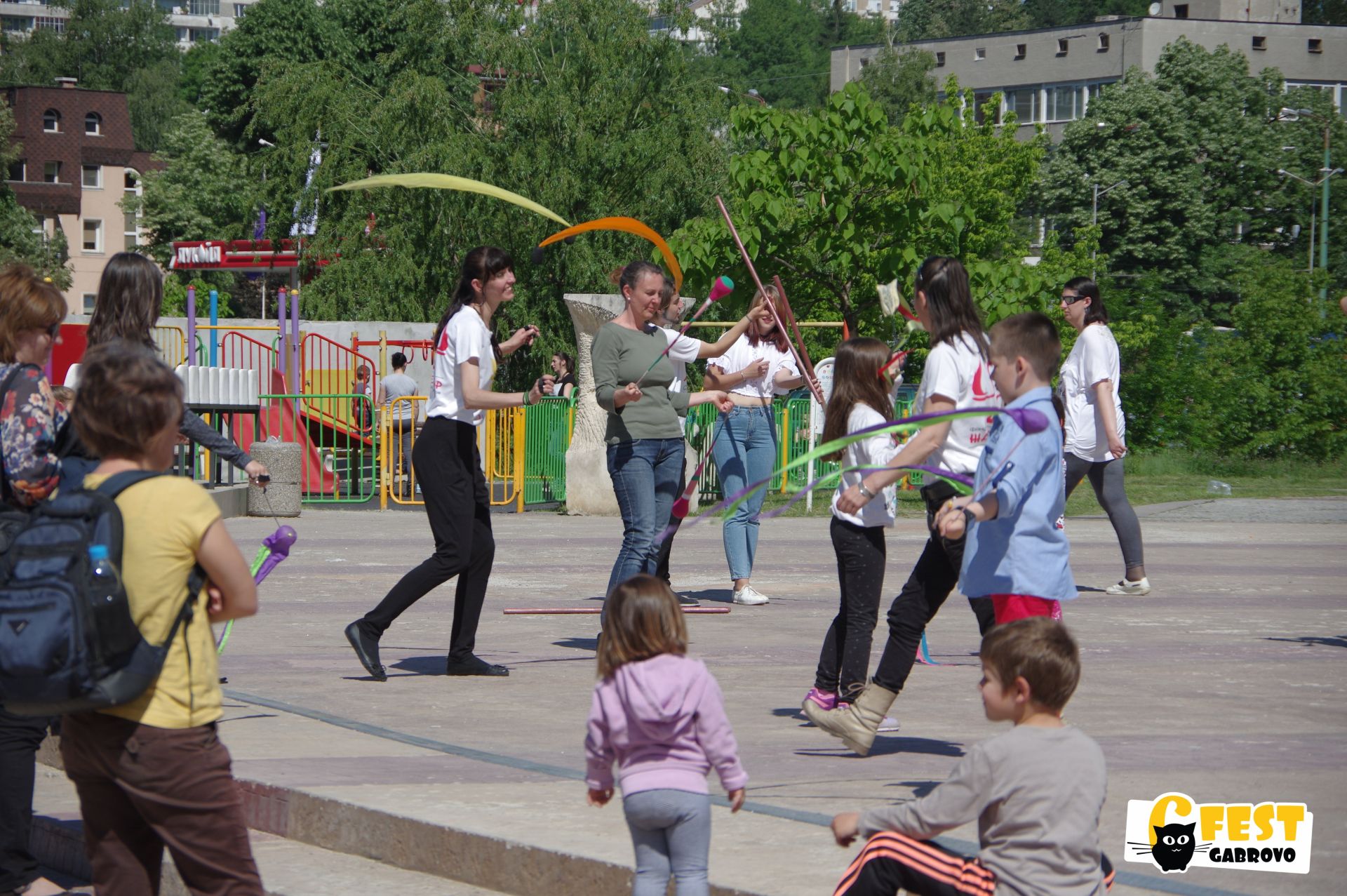 Tio Teo is a circus artist from Spain. On the afternoon of 20 May 2017 he performеd his mono spectacle "Surfing the street" at the new "circus arena" in Gabrovo - The Park with the Bear. The show was part of the program of many international festivals. It combines physical theatre, acrobatics, humour. 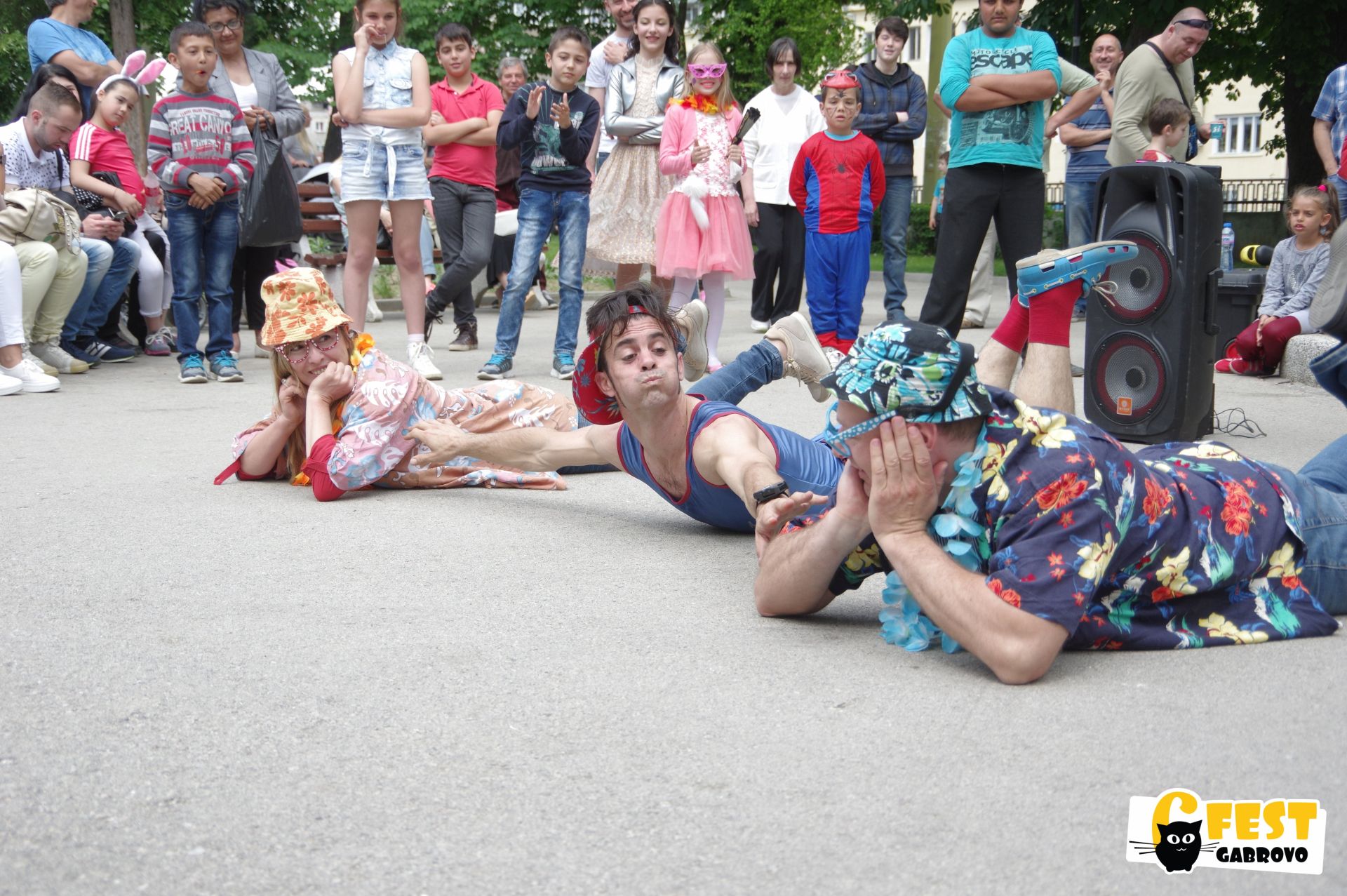 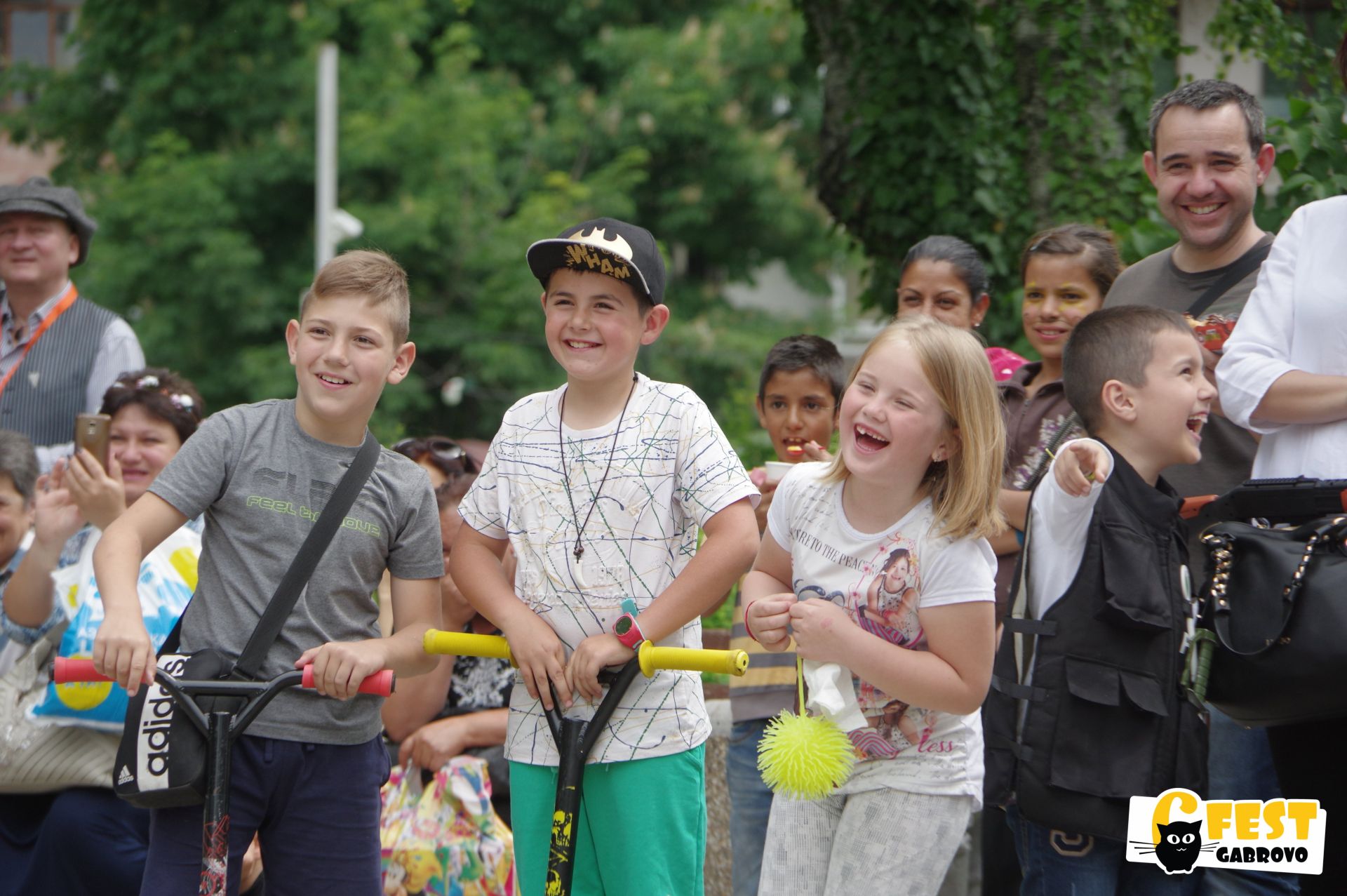 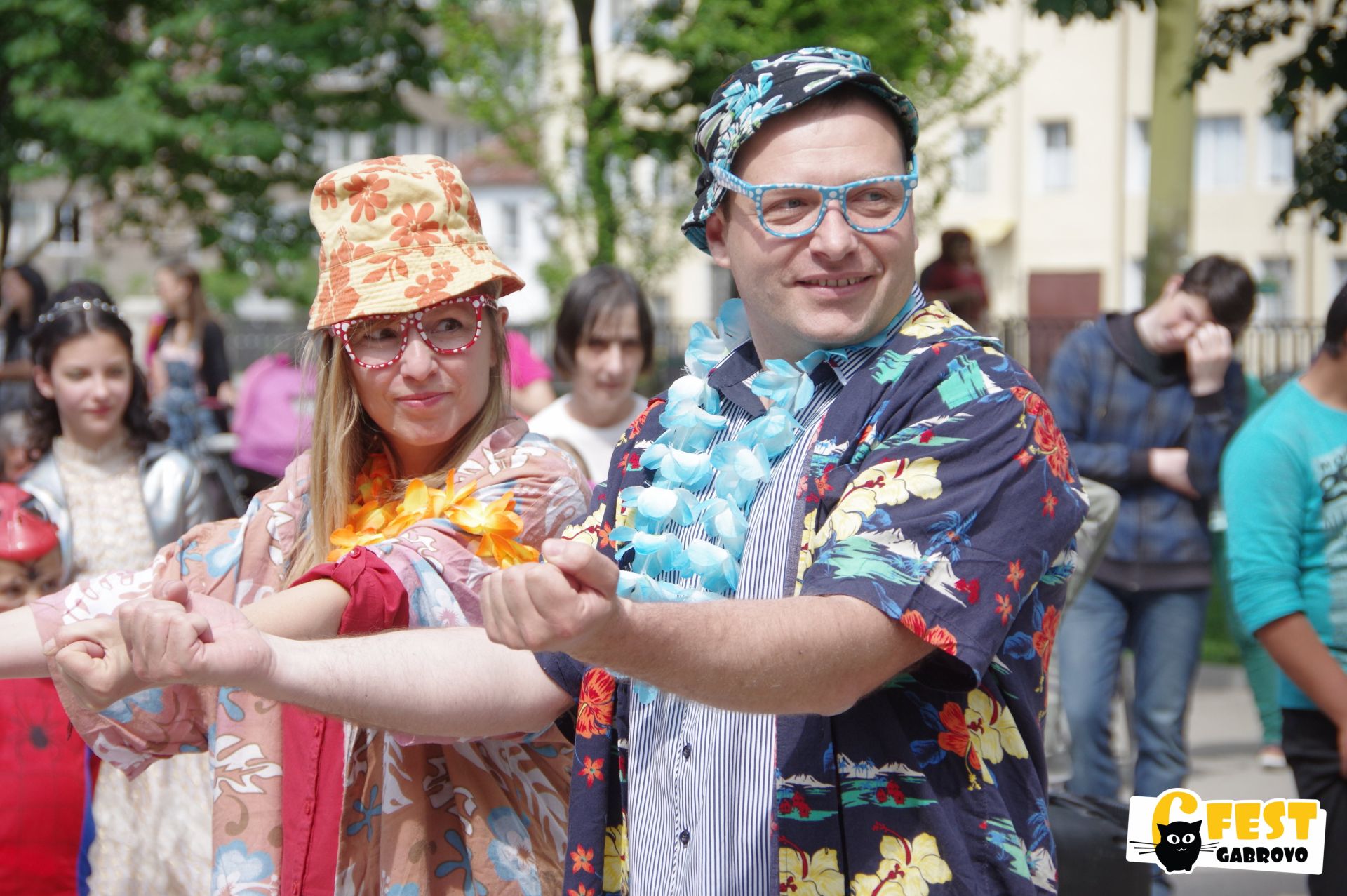 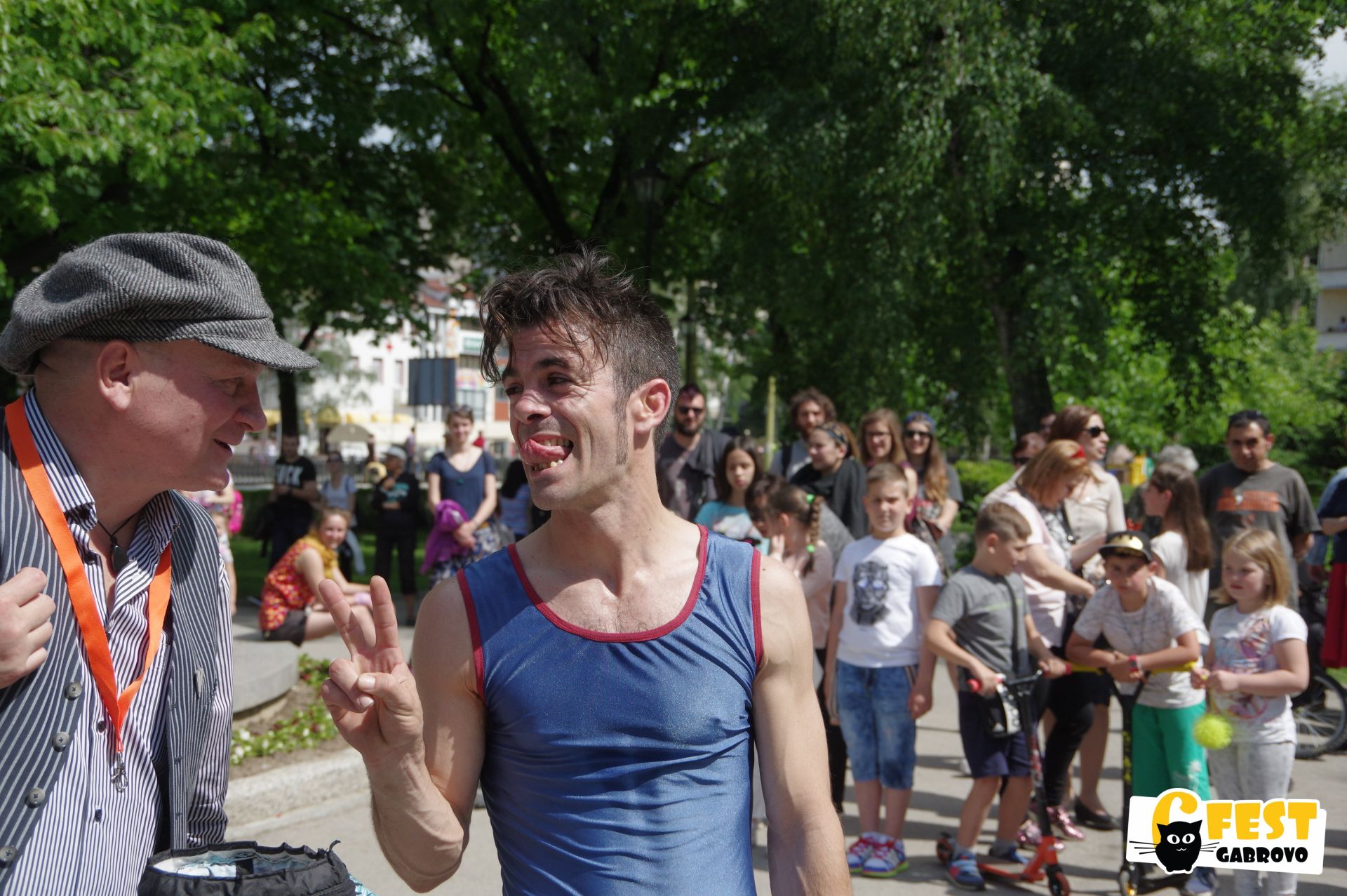 Circus artist Cara de Papa came from Venezuela, but this is not unusual for him, he travels around the world. In the Park with the Bear on May 20, 2017, he showed a performance with juggling and driving monocycle. 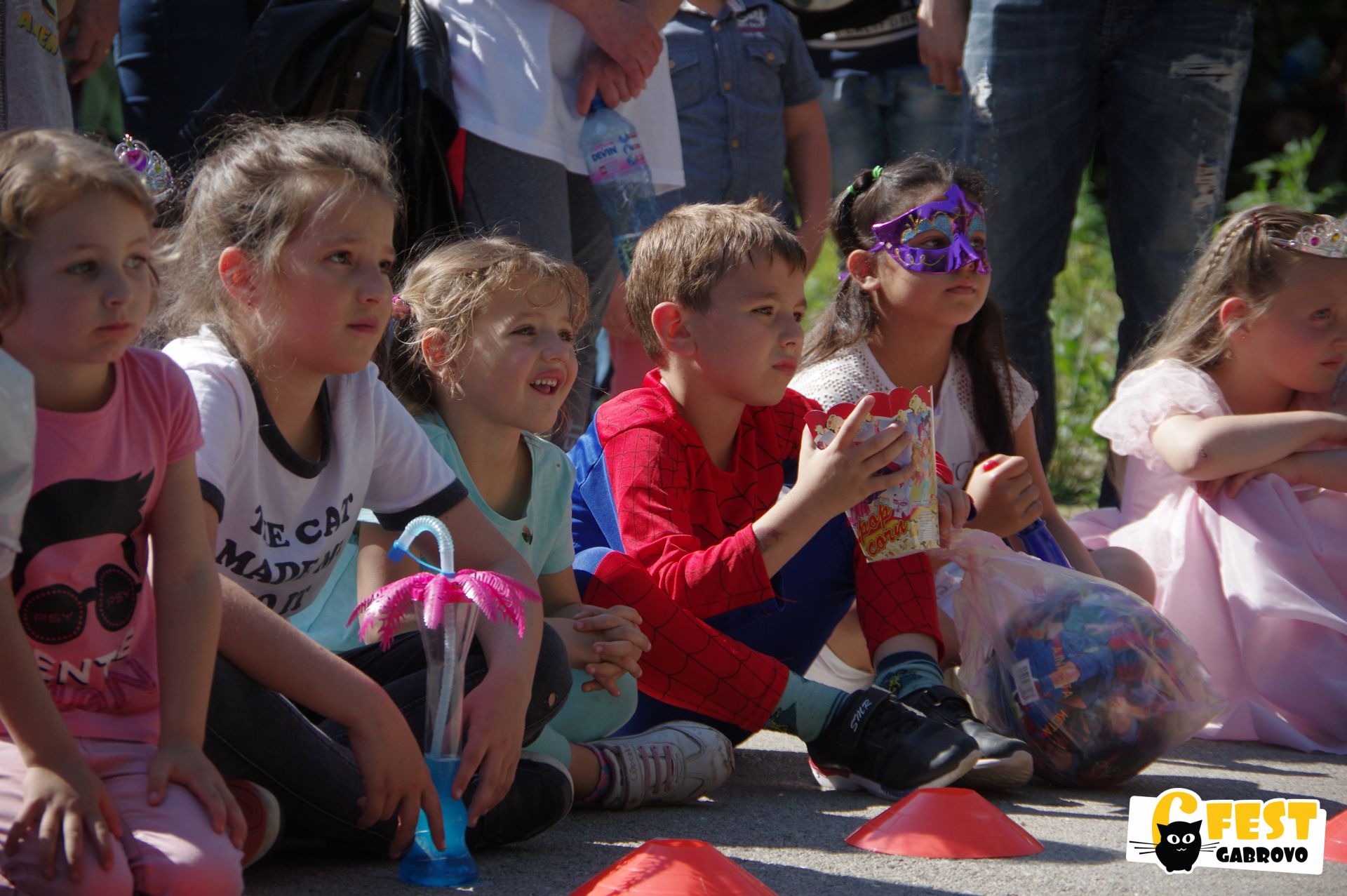 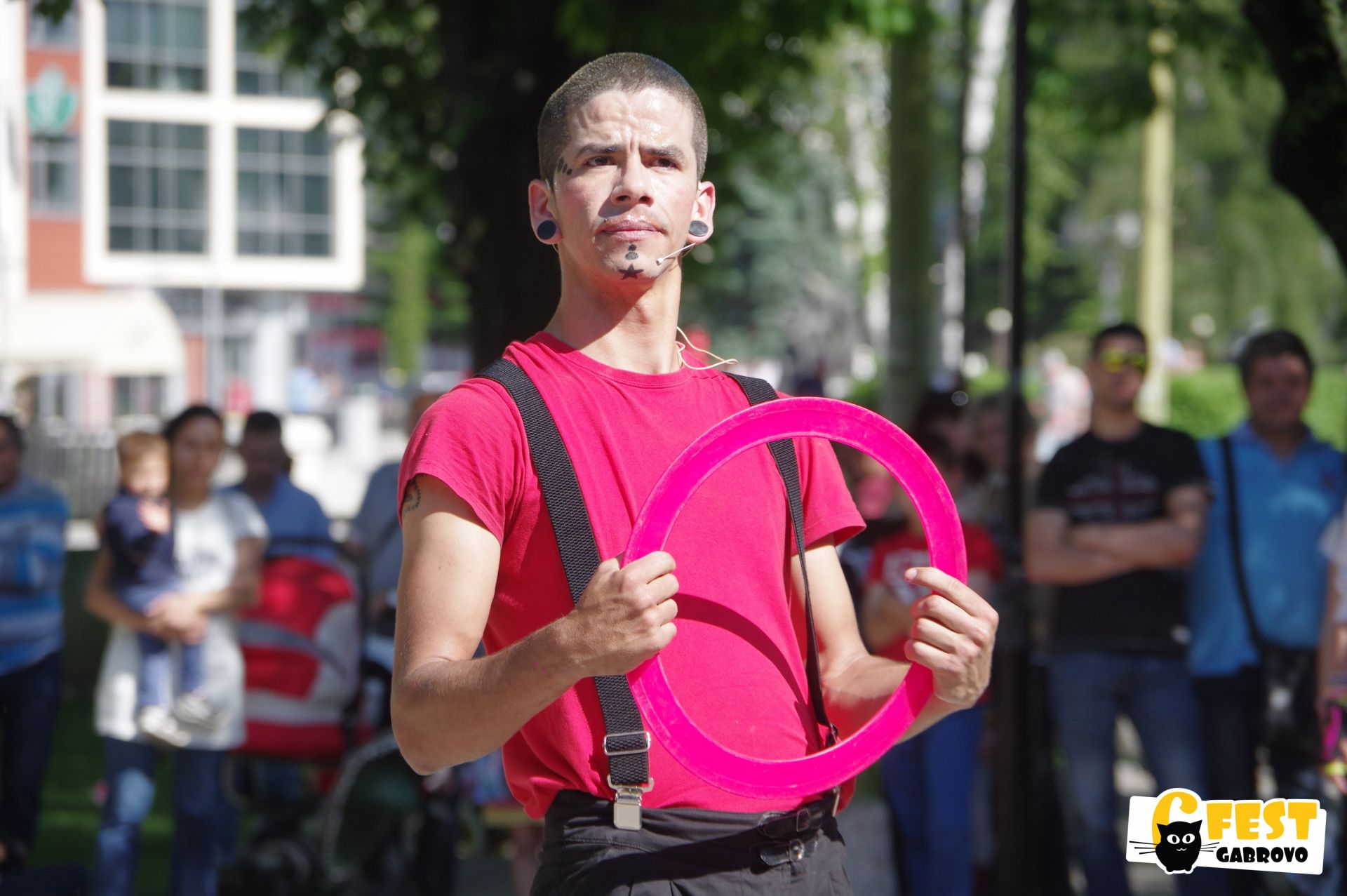 The living statue performer Ashton Ka performed on different central locations of Gabrovo - Igoto Bridge, "Radetzka" Str. and Baev Bridge - in the afternoon before the carnival procession on May 20, 2017. Ashton Kaperforms mostly in Europe – Belgium, Netherlands, Estonia, but also in Israel, Kuwait, Dubai, Indonesia, etc. She has won 7 awards on international festivals (3 1st prices) in the last 5 years. 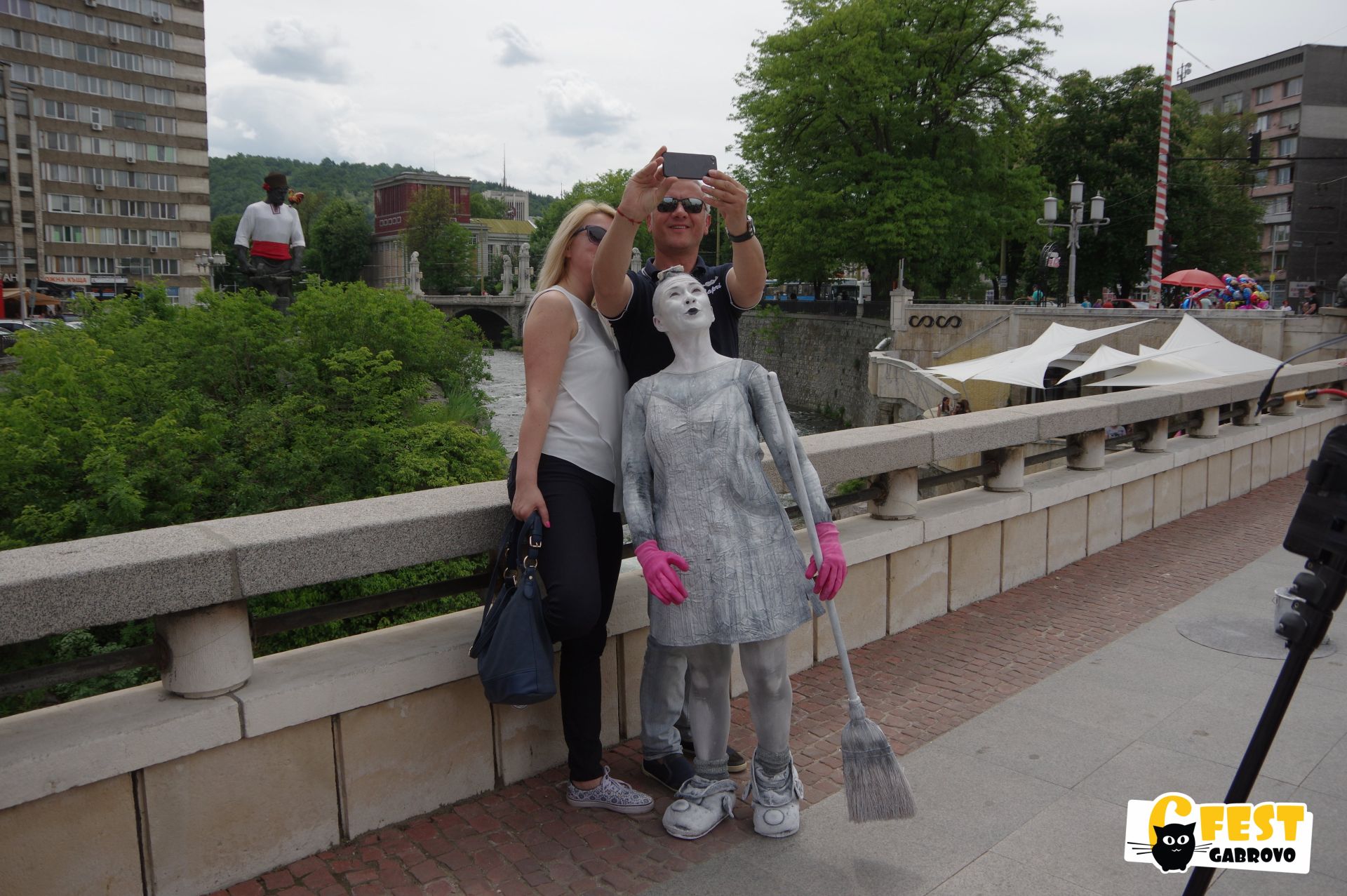 In front of House of humour and satire

In front of Sport hall “Orlovets”

In front of Interactive Museum of Industry Gabrovo

The show starts at House of humour and satire and goes on towards ul. Avram Gachev - ul. Radetska -  ul. Aprilovska - Vazrazhdane Square

The capital of humor Gabrovo has become the capital of street art thanks to the first edition of the 6Fest International Festival of Urban Arts and Happiness from 19 to 21 May 2017. The festival presented Bulgarian and foreign street artists in three festival days and 10 events.

Momchil Tsonev, 6Fest organizer: "6Fest has shown that Gabrovo can host an international art festival. With its first edition 6Fest attracted the attention of Gabrovians and tourists, even foreigners, who came to Gabrovo for the festival. Participating artists at 6Fest said that this is the first and only festival in Bulgaria dedicated to street performing arts. This is a serious prerequisite for the continueing of 6Fest in next editions.

Gabrovo has a tradition in street arts for more than a century. This is a unique phenomenon for Bulgaria. Even before the Liberation of Bulgaria (1878), there was a popular carnival-like holiday in Gabrovo called "Oleliynya". At the beginning of the 20th century, the Oleliynya transformed into a carnival (masquerade) procession. From the 60s of the 20th century, the carnival in Gabrovo got its familiar contemporary appearance. In the 21st century, Gabrovo could be a contemporary festival and carnival destination, our goal is to turn 6Fest into a tradition".

"For me 6Fest was a great experience that even changed my life! I am happy that such good artists have come and brought great joy to our city, "said the 6Fest volunteer Plamena Hristova. "Festival like 6Fest has never happened so far in Gabrovo! For me 6Fest was an unusual, funny and exciting event "- said Stefania Nyagolova, another of the 6Fest volunteers and a student in Gabrovo.

The project of „Vasil Levski Public Committee – Gabrovo“ is realized with the financial support of Gabrovo Municipality, CULTURE Program 2018. 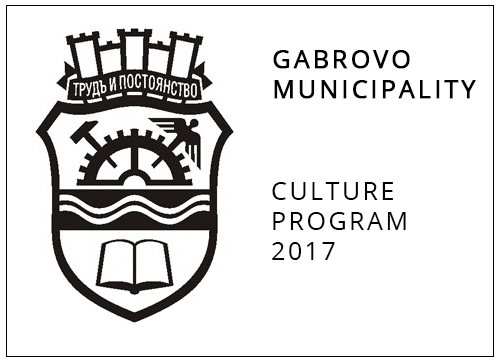 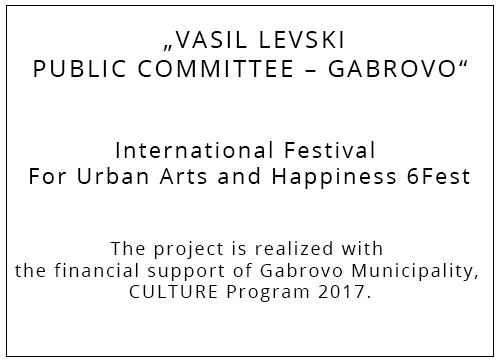